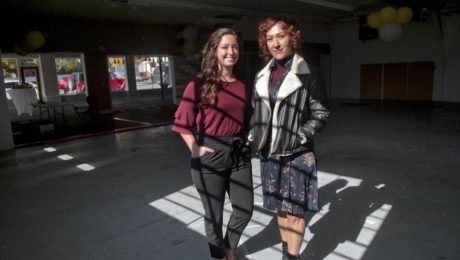 As Melinda Cadwallader and Cassidy Bones walk around a vacant building in downtown Coeur d’Alene, they see potential for a community space buzzing with activity.

Bones, Cadwallader and her daughter, Delia, aim to create The Hive, a coworking space geared toward women entrepreneurs – but inclusive to everybody – that fosters an environment of learning and collaboration.

“It’s a coworking and learning annex where you can get outside of your home, get outside of your normal flow of life and have a space to be inspired, to connect with other people, to work on your business and also know that everyone there wants to help support you, too,” Cadwallader said.

Bones and Cadwallader signed a lease for a 3,400-square-foot building at 405 E. Indiana Ave. because of its proximity to a wellness bar, day care center, parking and the energy of downtown Coeur d’Alene.

The Hive, slated to open in early 2020, will feature several coworking tables, a meeting and workshop area, photography corner, and a media room with equipment to develop podcasts.

Cadwallader, who has a background in vocational education at beauty institutes in Denver and Coeur d’Alene, wants to provide space at The Hive for community members to teach classes and host events.

“That’s what I got to do in vocational education. I was able to take people who were licensed professionals without a master’s degree in teaching and teach them how to share their knowledge and information with students,” she said. “When you see that growth in an individual – where they go from a professional to a teacher of that profession – that change affects someone’s whole life.”

The Hive is among many female-focused workspaces gaining traction nationwide as women entrepreneurs and freelancers look for an alternative to traditional offices, with resources and training to grow their businesses.

“Access to capital is a really critical thing to women entrepreneurs,” she said. “These spaces will often host pitch sessions and pitch coaching sessions to help women prepare to raise capital and help understand capital markets.”

Mayes added that she appreciates female-focused coworking spaces are inclusive to everyone, which reflects the diversity of skills and perspectives that startups often have among their teams.

Established female-focused workplace The Wing launched in New York in 2016. It has since expanded to eight locations nationwide and raised more than $117 million in funding from several investors, including SoulCycle founders Julie Rice and Elizabeth Cutler.

Seattle-based The Riveter, founded by CEO Amy Nelson in 2017, expanded its network of community coworking spaces built by women, for everyone, to five additional cities this year after securing $15 million in venture capital financing.

“Our expansion from one to 10 locations and thousands of members in just two years signals a significant market demand for workspaces, community, resources, and content that caters to the needs of women in work,” Nelson said in an email.

Nelson founded The Riveter after a decadelong career as a corporate litigator in New York and Seattle.

“I had a successful career and, for many years, felt comfortable working in the male-dominated space that is corporate law. But, when I shared the news of my first pregnancy with my colleagues in 2014, I felt the perception and perspective of me in the workplace shift immediately,” she said. “It didn’t make sense to me to remain in a system where I couldn’t make an equal dollar and where I knew mothers faced even more discrimination than women without children. So, I decided to start my own business, The Riveter – a modern-day union of working women and allies.”

Nelson said The Riveter, which now serves more than 2,000 members, has been met with excitement from entrepreneurs and businesses nationwide.

The future home of coworking space The Hive, at the corner of Fourth Street and Indiana Avenue in in Coeur d’Alene, is shown on Friday, Oct. 11, 2019. (Kathy Plonka / The Spokesman-Review)

In Coeur d’Alene, Bones said the community’s response to The Hive has been positive, although some people are confused by the concept.

“It’s just new,” she said. “People don’t quite understand it yet, but as we start talking and communicating about what this place is and what this place stands for, people have been very warm, receptive and supportive.”

Bones, who owns Beyond Bones Chiropractic and the small business consulting firm Ascension Consulting with her husband, Ryan, is excited about plans for education space and workshops at The Hive.

“As I’ve created, grown and tried to help rehab businesses, I’ve found there is a really interesting culture around that. The traditional business education that you get in college is not complete,” she said, adding marketing strategies are constantly changing. “So, I’m really excited to have current, very applicable things being taught.”

Memberships at The Hive start at $59 a month, which includes a reduced $10 daily rate for coworking space, two hours of workshops and a 15% discount on additional workshops, event space and media/conference room reservations.

A higher-tier membership – at $129 a month – includes unlimited access to the coworking space, four hours of workshops, two complimentary media/conference room reservations and a 30% discount on additional workshops and event space.

Nonmembers can rent coworking space for $25 a day.

The Hive is launching a fundraising campaign next week to assist with initial startup costs through “iFundWomen,” a crowdfunding platform for female entrepreneurs.

Cadwallader said The Hive’s focus will be primarily on local issues and women to create a space for empowerment in the community.

“It’s locally focused, and we see ourselves duplicating the space, but maybe in another smaller community, like Lewiston,” she said. “We aren’t looking to go to San Francisco. The Wing is there. The Riveter is there. But we have a heart for local community, small business communities, so being a hub for that in a small town is our appeal.”