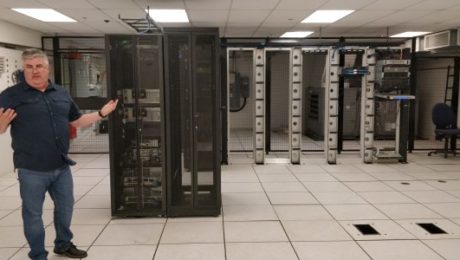 This article first appeared in Idaho Business Journal on June 24, 2019. By Sharon Fisher.

“A lot of people are contemplating how similar this is to rural electrification in the 1930s,” Kennedy mused.

As with rural electrification, the government is playing a large part in improving broadband internet in rural areas. Last fall, Intermax received $940,000 to improve service in Idaho’s panhandle from the Federal Communications Commission (FCC), which offered Idaho a share of the $1.49 billion it provided nationwide through its Phase II grants, funded by the Universal Service Fund. Intermax committed to providing 25 megabit per second (Mbps) download speed to 42 census block groups in north Idaho over the next five years.

In more metropolitan parts of the region, such as Coeur d’Alene itself, there might even be two fiber providers.

“But you get out to Rathdrum or Athol, there are none, and no expectations of it, due to density,” Kennedy said. “We have to figure out how to get those folks plugged in.”

Much of Intermax’ service is provided through fixed wireless, which means the company puts a transmitter someplace central and tall – typically, in rural Idaho, the town’s water tower – and puts a receiver, which looks like a satellite dish, on customers’ homes. If the house has a sight line to the water tower, it can typically pick up the signal.

While it might not be as fast as a direct connection, it’s a lot cheaper than laying cable, Kennedy said.

“Everyone gets excited about gigabit internet,” but people generally need only 8 to 12 Mbps, he said. “25 or 100 Mbps is going to be incredibly groundbreaking for rural areas.”

In one example, Intermax is going to be improving internet access around Schweitzer Mountain Resort, Kennedy said. There are 900 residences in the region that are “deeply underserved,” he said. His company will lay fiber to the top of the mountain, for nine miles, from Sandpoint, following the road and using utility easements. That fiber – aside from supporting conferences and other activities in Schweitzer – will feed the microwave transmitter that’s already on top of the mountain and improve service to those 900 residences, he said.

Kennedy was appointed to Gov. Brad Little’s Idaho Broadband Task Force, which was created in May through executive order. Little came to North Idaho last fall, as lieutenant governor, on an economic development trip, and met with Kennedy to talk about the FCC award.

“I found him to be an extremely quick study, well read and understood things that are completely boring and unsexy, like putting extra conduit in the highway,” Kennedy said.

That extra conduit can be used later to string cable without having to dig up the highway again, a policy underway in a number of areas nationwide called “dig once.” At that time, Kennedy volunteered for whatever Little planned to do to improve Idaho’s internet service, which numerous studies have found ranks near the bottom nationwide.

The broadband task force will help determine the role that the state can play in improving broadband internet in Idaho, such as by offering incentives or tax credits, Kennedy said. And while rural residents used to be fine without broadband internet, that’s no longer true, he said.

“I can’t think of anyone I’ve talked to who didn’t want it on some level,” Kennedy said. “Rural folks can live off the grid, because they have access to their job elsewhere, or can sell products from rural North Idaho. It’s people in rural areas with the greatest needs.”