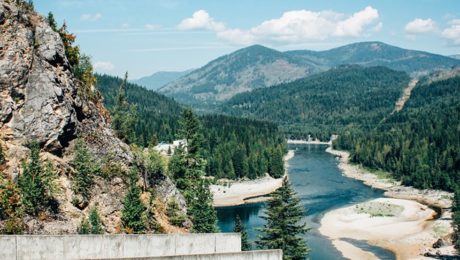 This article first appeared in The Inlander on December16, 2021.

During the pandemic, while some out-of-the-way outdoor recreation areas saw visitation plummet (such as Denali National Park in Alaska), many other parks saw an influx of new and returning visitors anxious to get out of the house.

Lake Roosevelt National Recreation Area in northeastern Washington, for example, got 160,585 more visitors than in 2019, with a near record 1.5 million total visitors in 2020, according to parks data that goes back to the 1940s.

With campsites and trails in the area also proving popular, Pend Oreille, Ferry and Stevens counties got a taste of how tourism can benefit surrounding towns.

“We have hundreds of lakes and huge waterways, and we know that those activities are well used,” says Shelly Stevens, who runs regional marketing for the Tri County Economic Development District, which covers all three counties. “One of the results of the pandemic has been this huge influx of people that maybe weren’t outdoor enthusiasts prior.”

However, not every community has been able to manage the flow. Moab, Utah, once a uranium mining community, successfully rebranded in recent decades as a massively popular outdoor destination for hiking and biking. But with nearby Arches National Park so popular that it’s full all the time, vacation rentals driving up the cost of living, and illegal camping and dumping of human waste in the area causing issues, NPR reported this summer that the city is now trying to pump the brakes on tourism.

Luckily, there are ways to plan ahead and design destinations that are welcoming to visitors while limiting their impact. From offering free shuttles to avoid overflow parking on busy roads to designing trail systems that provide great views while discouraging people from trekking through wilderness areas, many communities have designed creative workarounds for the problems that can arise.

Now, Stevens, Ferry and Pend Oreille will start planning for the future in hopes of avoiding the pitfalls other regions have seen, as the first region in the state to receive a rural tourism support grant from the nonprofit Washington Tourism Alliance.

“The timing of this project is great because we want to get ahead of that increase in tourism to the area,” Stevens says, “so that we don’t turn into a Moab or Jackson Hole or something where all of a sudden the locals can’t afford to live here.”

When Washington became the only state in the country to close its tourism office in 2011 (amid ongoing budget concerns following the recession), the Washington Tourism Alliance stepped in to maintain some of the efforts to attract people to the state. After the state reopened the office a few years ago, the alliance became a contractor for the state, continuing its work to encourage visitors while making sure impacts are managed responsibly.

“We want to not only provide marketing for the state, but also try to build infrastructure and create tourism ecosystems that are not only great for visitors, but also for residents,” says Mike Moe, director of tourism development and strategic partnership for the alliance. “We hired a consultant who helped Oregon put their program together and we’re very excited to pilot this in northeast Washington. We have so many amazing assets up there.”

“Outdoor recreation is an asset that’s, for the most part, sitting there and is available,” Stevens says. “One of the exciting things about this program is that it’s very much based on public outreach and participation, and people coming to the table and helping decide what they want tourism to look like in a decade.”

Consultant Kristin Dahl, who runs private company Crosscurrent Collective, formerly worked for Travel Oregon, where she created a process for developing tourist destinations and addressing issues in areas that are already visited regularly.

“The Oregon tourism folks have it figured out,” Stevens says. “They have done a fabulous job especially with outdoor rec and mountain biking.”

For example, when communities along the Columbia River Gorge went through the process, they were able to create car-free travel itineraries, launch an express shuttle for visitors, open a new trail segment and park, and more.

Dahl says other communities that went through a similar process developed things like food tours, expanded trail systems, or maps of local points of interest.

“It runs the gamut,” Dahl says. “Sometimes what our communities will do is also look at their heritage, whether that’s Indigenous or industrial heritage, and look at a way to bring that history to the forefront.”

Through a series of workshops, Dahl asks communities what they want to look like in 10 years, with a “steering committee” of local leaders picking the starting points for those conversations.

The public workshops in northeastern Washington could start in March. The region has already established its committee with representatives from the Kalispel Tribe of Indians, Spokane Indian Tribe and Confederated Tribes of the Colville Reservation, as well as regional business leaders and recreation-oriented experts. As the process wraps up, that group is meant to be the backbone that ensures projects actually come to fruition, Dahl says.

Through the process, community members will also be asked to address any tensions around tourism that already exist or that may come up in the future.

“You can’t stop the flow, unfortunately, but you can manage it and use tools to up-play or downplay when you want visitors to come,” Dahl says. “How do you continue to develop visitation in places that aren’t seeing as much so you can kind of spread the love?”

Stevens says it will be great to get the process going and to continue building the relationships that have already started to take shape in recent years in the region.

“We want to be thoughtful about the growth and what that’s going to look like,” Stevens says. “The most important thing to remember is to make improvements for the people that are already here, and enhance their quality of life, and by virtue of that others will enjoy it, too.” ♦